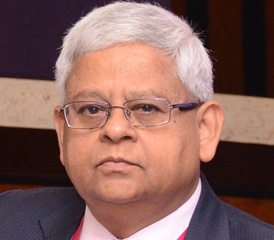 Prof Abhijit Basu (LM-267) was born on 30th of December 1948. He did his MBBS from NRS Medical College Kolkata, following which he joined Government Health Service. He later did his DMRT and MD in Radiotherapy from Kolkata, his dissertation guide being Dr. Saroj Gupta, a doyen of Oncology. He later did the DNB in Radiotherapy. He served as Faculty and Head of the Department at a number of Teaching Hospitals in West Bengal including Medical College Hospital, Kolkata where he served as Professor and Head between 2004 and 2012, when he retired from service. Following his retirement, he served as Senior Faculty and Teacher for DNB (Radiotherapy) at Narayana Superspeciality Hospital, Howrah (WB), a role he held at the time of his demise on 19th of July 2020 at Peerless Hospital, Kolkata from complications of COVID-19 infection.

Prof Basu was a Faculty and Examiner for DMRT and MD (Radiotherapy) under University of Calcutta and subsequently The West Bengal University of Health Sciences for almost two decades, as well as many other Universities across India. He was also an Appraiser and Guest Faculty for DNB (Radiotherapy) at Cancer Centre Welfare Home, Thakurpukur, Kolkata and an inspector for MD (Radiotherapy) appointed by the Medical Council of India. He was also appointed as an Expert on Cervical Cancer and Palliative Care by the WHO.

He delivered the Inaugural Dr. Saroj Gupta Oration in 2017 and received the Lifetime Achievement Award in 2018 by the Association of Radiation Oncologists of India (West Bengal chapter).

He was a renowned academic with many publications to his name in scientific journals and a beloved teacher to generations of trainees in Radiation Oncology, Radiotherapy Technology and Nursing. While being warm and empathetic, he was always able to retain his dignity and command respect. His classes were a favourite with all categories of students, whether physicians, nurses or technologists, in combining encyclopedic knowledge with lucid communication.

His knowledge and interests extended far and wide beyond Oncology, or indeed, the medical field. He was an aficionado of literature and theatre and a wonderful raconteur. He was also an able administrator with a lightness of touch and understanding of the felt needs of all his staff members.

He lived a full life, teaching till the end, and also delighting in the company of his young grand-daughter. While the end did not come in the serene manner he deserved, he fought valiantly against the dreaded virus for as long as he was able. Prof Basu is survived by his wife and son, both well-known medical academicians in their own right, and while he leaves a great void in the lives of all those who knew and loved him, he will live on forever in our hearts.