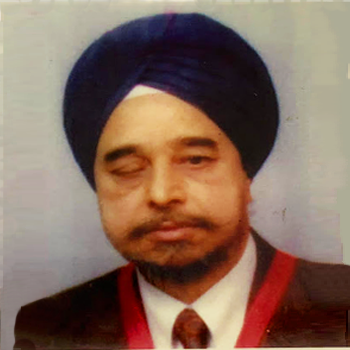 Dr. Malook Singh Gujral S/o Sardar Bhagat Singh ji Gujral, born on 6" of March 1940 in a village called Banda in Tehsil Sukho District Rawalpindi, the then India, now Pakistan faced the brunt of partition at the age of seven. With great difficulty he came to Burhanpur in M.P and had his schooling there and then came to Indore for his higher education & did his M.B.B.S. in 1968. After house job in medicine he joined Govt. Service & became an Assistant Surgeon in Govt. Cancer Hospital Indore on 01-Jan-1971. He did his DA. in 1972 & then M.D. in Radiotherapy. He became the Med. Superintendent of the same hospital. During this period he has trained fairly large numbers of Postgraduate Students in Radiotherapy and was instrumental in establishing several Radiotherapy departments. He was the examiner for several Universities & DNB courses. He has inspected several Prime Radiotherapy Departments of the Country on behalf of Medical Council of India. He became President Association of Radiation Oncologists of India in 2000 and has received Von Hessen fellow of AROI. In his tenure, he has Organized National & State Conferences and has attended several National & International Conferences. Due to his Zeal for serving, he is still continuing social services toward the welfare of the society in general & Radiotherapy and Cancer Patients in particular. Wife, Dr. Mrs. M. Gujral has retired as Professor & Head Pathology M.G.M. Medical College Indore.