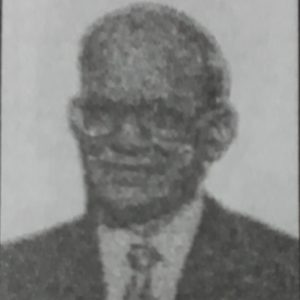 Prof. Girish Chandra Pant popular as Girish or Pant, amongst his friends & seniors, completed his MBBS from King George’s Medical College (KGMC), Lucknow in 1960, DMRE in 1962 and MD (Radiology-combined diagnosis & therapy) in 1964. He began his professional career a Assistant Radiotherapist at KGMC in 1964. In 1965 he moved to the Institute of Medical Sciences. Banaras Hindu University & along with Prof. A.D. Singh, was instrumental in building up the Department of Radiotherapy at BHU.

He also took up the task, along with his colleagues there, in starting the courses of DMRD and subsequently MD (Radiotherapy) at BHU. He has been one of the founder members of the Association of Radiation Oncologists of India, founder member of the Indian College of Radiation Oncology and member of the first executive body of AROI. Prof. Pant took up the initiative in organizing the second Annual Conference of AROI at Varanasi in 1978 and has made an important contribution to the growth of the association & the specialty in the country.

Prof. Pant was Dean, faculty of Medicine of Banaras Hindu University and acting Vice-Chancellor of BHU from June 13, 1993 to Dec 13,1993. He retired form active service from BHU on January 31, 1996 & spent his retired life doing voluntary medical and social service at Varanasi.

It is an irony of fate that the man who spent his life fighting against the dreaded disease “Cancer” fell a victim to this very disease. In May 2001, Prof. Pant was diagnosed to be having a brain tumor that subsequently turned out to be Glioblastoma Multiforme of the right frontal lobe of the brain.

He was operated, received chemotherapy and was well for a while. Then again in early 2002, began a down hill course and he breathed his last in the evening of June 15, 2002. Thus came the end to an illustrious career of an excellent medical man who rose to eminence as a direct result of his hard work and who brought excellent fortune to all those who have interacted with him not only his professional capacity but also in his personal life.